Girlfriend belongs in the trash 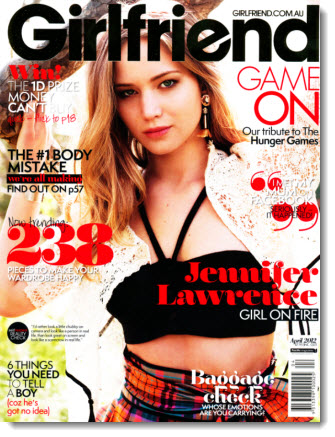 The only place Girlfriend magazine should be seen is crushed up in the garbage bin. It has no place on the shelves if it continues to ignore the research that girls who are readers of the magazine HATE themselves! That they are developing eating disorder, low self-esteem, are dieting and want to change the way they look, because what they look like isn't what they see in the magazine. below is a link to Melinda Tankard Reist's website where she posts the results Girlfriend magazine received from a survey asking their readers how they felt about their appearance. Isn't it funny that they would of expected to receive those results? i mean how is it possible not to when all they talk about is " The #1 Body Mistake we're all making" "6 things you need to tell a boy...." Now i know that Girlfriend is not the worst magazine on the shelf and i would LOVE to see pretty much every magazine in the trash but what disturbs me the most about Girlfriend and Dolly is that they are aimed at young girls who are developing, discovering themselves, trying to find out what those weird body changes mean and what happens when you start dating boys... you'd hope that adults would give better advice than a step by step guide on how to perform oral sex. Should a 12 year old really be encouraged to perform sexual acts? Really responsible girlfriend. You're really doing a great job.